​Karin Larsson, born Karin Bergöö, was Born October 3, 1859, in Örebro, Sweden to an upper middle-class family.  Karin showed an interest in the arts from an early age and excelled at painting.  She started at the Royal Swedish Academy of Arts in Stockholm in 1877, where she studied until 1882. In 1882 she went to the artists’ colony in Grez-sur-Loing, near Paris, where she met Carl Larsson.

​Carl and Karin fell in love and married in Stockholm in 1883, and started a family. In the late 1880s, Karin’s father gave them Lilla Hyttnäs, a little cottage next to a stream in the Swedish countryside as a gift.

Bedchamber embroidery and tapestries designed and created by Karin Larsson

The year 1884, was a milestone in French art.  Up until then any artist wanting to progress in their chosen career relied completely on having their works exhibited at the Paris Salon, and for that to happen they had to submit their paintings to a jury which decided whether their works were good enough to be exhibited. The jurists were, at this time, increasingly rigid and conservative in their views of what was considered acceptable for exhibit and were not receptive to the works presented by Impressionist artists, whose works had moved away from the traditional academic style.  The Impressionists would often have their paintings rejected by the Salon jurists or if they did manage to have a painting accepted it would be hung in such a way that it was almost hidden from view.  In 1863 the jurists rejected a surprisingly high percentage of paintings and this caused a furor among the “discarded” artists, resulting in the Salon des Refusés, an art exhibition held in 1863 in Paris for those artists that had been refused by the jury of the official Salon.  In 1880, the Salon again rejected the work of many Impressionist and Post-Impressionist painters, which led to a 2nd Salon des Refusés in 1883.  ​

Henri Edmond Cross (1856–1910) was a leading Neo-Impressionist painter, a pioneer of Pointillism, and a founding member of the Salon des Indépendants.

Cross was born Henri-Edmond-Joseph Delacroix, the only surviving child of his French father, Alcide Delacroix, and British mother, Fanny Woollett.  The family moved to Lille when Henri was 9.  He showed an interest in drawing when he was young and his parents sent him to Carolus-Duran, a painter and art instructor, for private drawing and painting lessons when he was 10. He was encouraged as a child to develop his artistic talent by his father’s widowed cousin, Dr. Auguste Soins, who paid for much of Henri’s artistic training.  Henri spent a short time in Paris when he was 19, studying under the tutelage of the French realist painter François Bonvin before returning to Lille.  At the age of 22 in 1878 he enrolled in a three-year course at the Écoles Académiques de Dessin et d’Architecture in Lille and studied under Alphonse Colas.  Three years later he returned to Paris and studied in the atelier (studio) of Émile Dupont-Zipcy.

The cottage Lilla Hyttnäs as painted by Carl Larsson 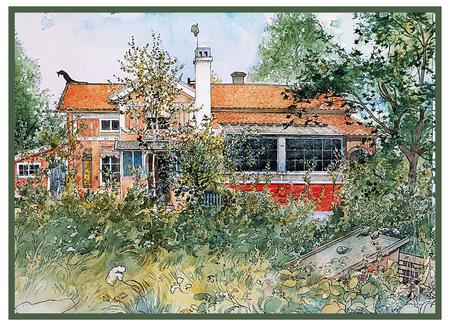 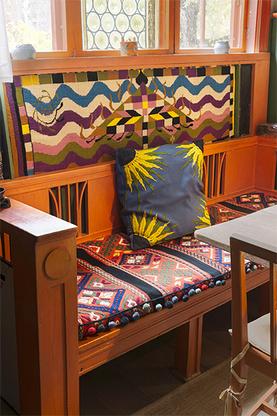 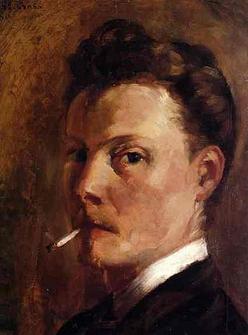 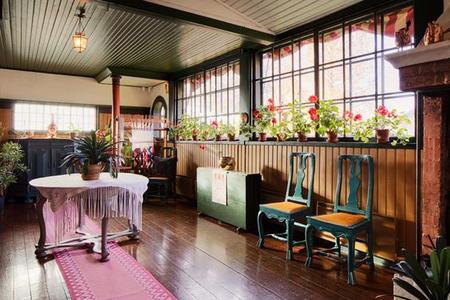 Both she and Carl were artists ahead of their time, and the very lives they lead have become an iconic symbol of Swedish culture. Karin gave up painting to raise their 7 children, but she never gave up on her artistic pursuits. She created, embroidered, wove, and built the world around her family, and Carl in turn shared it with the world though his paintings. In the early 1900s, Sweden (and the rest of Europe, for that matter) had seen nothing like this type of happy, light-filled style.​ 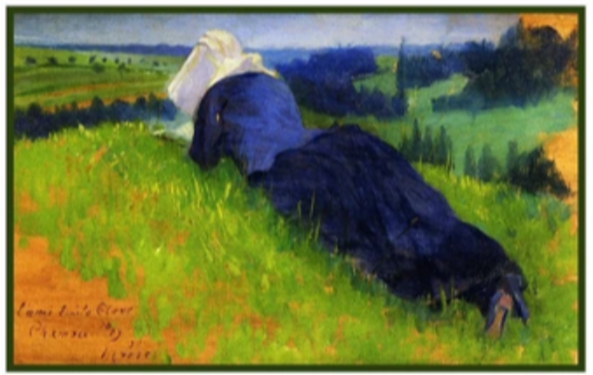 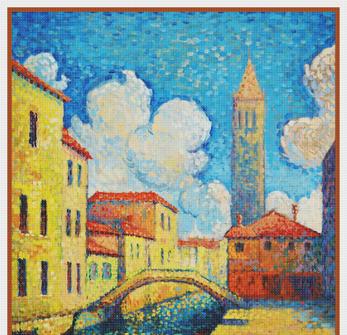 The garden room designed and created by Karin Larsson

During their lifetimes the rooms of their lovely home came to the attention of Swedes and Europeans through various publications of Carl Larsson’s watercolors which highlighted the various rooms and surroundings of his home in Sundborn. At the time, Carl was viewed as a muralist, producing works for public buildings. Yet it was his watercolors depicting their charming and idyllic cottage that brought him the most acclaim. At the time it was not known that Karin Larsson, an uncelebrated textile artist, was the creator of those beautiful interior designs with embroidered and woven tapestries.

The following summer a number of these disgruntled artists banded together and formed the Société des Artistes Indépendants (Society of Independent Artists) and based the society on the premise “sans jury ni recompense” (without jury nor award), allowing any artist who wanted to participate to display their work.  They held their own inaugural exhibition, Salon des Indépendants, in May 1884 where Henri Cross exhibited some of his paintings, along with other founding members of the Société including Paul Cézanne, Paul Gauguin, Henri de Toulouse-Lautrec, and Georges Seurat.  Vincent Van Gogh also displayed some of his work at the exhibition.

It was around this time that Cross changed his name, first to Henri Cross, and later to Henri-Edmond Cross, to differentiate himself from other French artists named Delacroix, (a very common name in France).  Delacroix means “Of the Cross” in French, so using the Anglicized version of the name (Cross) made sense.

In 1891 Cross became Vice-President of the Society.  He was by this time becoming one of the leading figures in the small world of Neo-Impressionist painters in France.

Cross had begun wintering in the warm climes of the South of France in 1883, finally moving there full-time in 1891.  He met his future wife, Irma, there in 1888, and they married in 1893.  His health was poor, suffering from vision problems, rheumatism, arthritis, and eventually cancer, so after moving to the south he rarely travelled out of the area.  His friend Paul Signac moved to nearby Saint-Tropez in 1892, where they frequently hosted gatherings attended by visionaries such as Henri Matisse and Albert Marquet.

​Cross’s painting styles evolved significantly over the years.  His early works, mainly portraits and still-lifes, were dark and in the Realism style.  After meeting Claude Monet in 1883, he gradually shifted to doing landscapes, in a brighter Impressionist style.  Impressionism uses lively colors and quick brush strokes to capture the texture of the subject and the impact of light on its surface rather than individual details. Instead of mixing colors on a palette, Impressionists placed the brush strokes on the canvas and let the viewer's eye do the mixing of colors. It is based more on emotions and the passing moment than science.

Most of Cross’s friends in the Société des Artistes Indépendants were Neo-Impressionists, a movement which peaked between 1886 and 1891.  Cross initially resisted that movement and continued working in the Impressionist style until 1891, when he adopted the Neo-Impressionist style.  Neo-Impressionism took advantage of the evolving knowledge of how the retina sees light and the mind combines colors.  Neo-Impressionism took the colors and themes of Impressionism but took a scientific approach to art, focused on the theory and division of color and vision and breaking things down to a more fundamental and basic level.   The primary techniques used in Neo-Impressionism abandoned actual brush strokes and replaced them with small, distinct patches (Divisionism) or dots (Pointilism) of color, which interacted optically to create shadow and dimension.  The dots appear to intermingle and blend in the observer’s eye.

​Cross’s first Neo-Impressionist painting was a Divisionist portrait of his future wife, Irma Clare in 1891.  His affinity for the Neo-Impressionist movement involved not only adoption of the Divisionist and Pointilist techniques, but also the political philosophies of the members of the movement.  Many believed in anarchist principles and hoped for a utopian society, and this influenced his choice of subjects - scenes depicting a utopian world that could exist through anarchism.

Many of Cross’s paintings from the early to mid 1890’s are in the Pointilist style. Other artists who used this technique include Georges Seurat, Maximilien Luce, and Paul Signac. Other well-known artists who briefly made works in Pointillist style were Vincent Van Gogh and, early in their careers, Picasso, Mondrian and Kandinsky.

In 1895 Cross gradually began changing his technique, partly because he found it tedious and time consuming, and also because of issues with arthritis and his eyes.  Along with his friend Paul Signac, he began to develop a Neo-Impressionist technique that was more intensely colorful and varied in its application, using broad, blocky brushstrokes and leaving small areas of exposed bare canvas between the strokes.  The resulting surfaces resembled mosaics, and the paintings are seen as precursors to Fauvism and Cubism, techniques used by early 20th Century artists.  Examples of this are Cross's "The Artist's Garden at Saint-Clair", from 1904-05 and "Garden of the Painter at Saint-Clair" from 1908.  (Cross liked to paint his garden, apparently!)

Cross died of cancer just four days short of his 54th birthday, on May 16, 1910.  In July 1911, the city of Cross's birth, Douai, mounted a retrospective exhibition of his work.   His work is widely acknowledged as having wide influence on later developments within the French avant-garde, and as a major pioneer of 20th-century painting.

In the late nineteenth century, Karin refused to accept the conventions of the day and created a light warm and comfortable environment that is highly popular to this day. Karin’s designs celebrated color, nature, and the cultural heritage in contemporary Swedish design. Karin designed not only wall hangings, tablecloths, curtains, bed coverings, but furniture as well.

Here at Orenco Originals we've been working hard converting many of our paper charts to digital format so you can purchase and download them instantly.  We now have a total of 213 PDF digital patterns available in Our Store,  including 38 Christmas themed digital patterns that you can start stitching immediately.   You'll be able to print them from your computer or work directly from your tablet or iPad so you can zoom in on the details.

Please let us know if there are any charts that you'd like to purchase in digital format that we haven't already converted, and we'll add it as soon as we can!

The Décor in most early nineteenth century front rooms was Victorian - very dark with heavy darkly upholstered furniture and drapes.  In many cases these rooms were only opened for company or funerals. In the Larsson home, however, all the rooms of Lilla Hyttnäs  were livable and used by all members of the household—even the family dog. 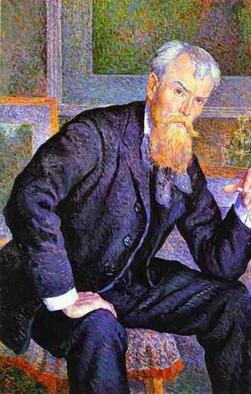 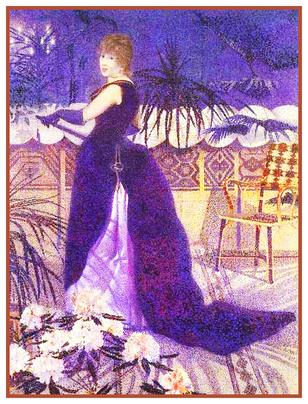 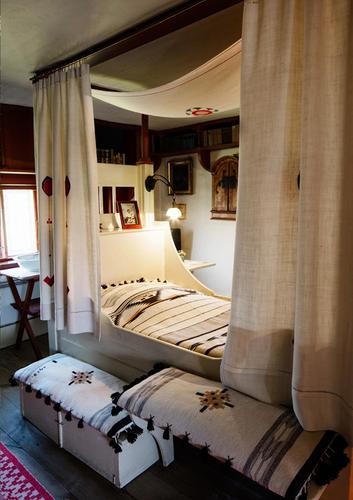 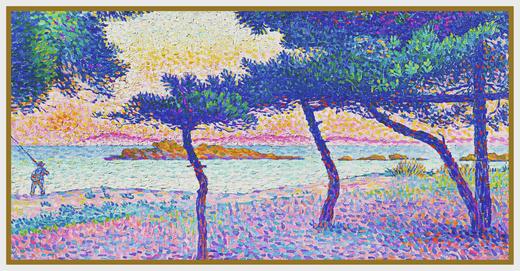 Today, Karin is recognized as not only Carl’s muse and the mother of his seven children, but as an innovative artist. Her works, along with other contemporary decorative artists, are currently on display at Gothenburg’s Röhsska Museum of Fashion, Design and Decorative Arts, Sweden’s only museum of applied art.

In 1997, in London, IKEA mounted a display at the Victoria and Albert Museum highlighting Karin’s work as never before in an exhibition titled “Carl and Karin Larsson: Creators of the Swedish Style.” That exhibition showcased Karin as one whose artistry was based on the native crafts and folklore of Dalarna, the province where she lived and worked.

Karin is considered by many designers and scholars, both in Sweden and the United States, as a leader in design. The interiors she designed, on display in their home and now at the Röhsska, capture in the way Karin turned dark eighteenth-century atmosphere into a warm light comfortable ambiance which is the mainstay of Swedish design. Swedish style today also consists of colorful beautifully embroidered fabrics—like the smocking on the tunics of little yellow-haired schoolgirls and on needle-worked tablecloths. Karin’s beautiful designs can be seen every day through Carl Larsson’s paintings.

Be sure to check out our counted cross stitch patterns inspired by Karin and Carl Larsson.